Kali is often spoken of as the goddess of destruction, or of time, and there is truth to these descriptions, mythologically and linguistically speaking. While these simplified terms can be helpful when trying to apply the mythological stories and lessons of Kali psychologically to whatever we might be facing in life, ultimately these are just very simple ways of speaking and thinking about her, and don’t even begin to scratch the surface.

So I want to urge you for a moment to stop thinking about Kali as the sword-wielding, black-skinned goddess wearing a skirt of severed arms and a garland of heads. Just for a moment, let’s think about her differently.

If we wanted to think about her in concrete terms, we might say that Kali is the blackness of infinite space, the depth of infinite knowledge, the beingness of infinite time. She is everything that exists and does not exist, the constant arising and dissolution of the universe in every moment.

She grants nothing less than liberation, and expects no less from her devotees than this goal. Practitioners can often fool themselves into thinking that what they want is liberation, when what they really want – whether they realize it or not – is power and influence, or thrilling experiences, or similar traps. But Kali is no fool! Even if we can fool ourselves, we can’t keep anything from her or fool her, because she is not separate from even our deepest being and consciousness. She is the absolute, uncompromising, highest self, which is one with all of time and space, and beyond. She is the absolute void from which everything arises, the absolute fullness into which it returns.

Kali is the first emanation of the Infinite Mother, what we call MAA (and which our tradition identifies with MAA Kāmākhyā). She is the first of the Mahavidyas or Great Wisdom Goddesses (or Great Mantras), and the one from whom all the others emerge.

The Kamakhya Tantra, Kalikapurana, and Yogini Tantra all declare that Kali and Kamakhya are the same goddess. So although Kamakhya is most visibly associated with Maha Tripurasundari (Ṣodaśī), her somewhat more hidden identity is in fact Kali Maa. In the goddess we now know as Kamakhya we find the complete union of Tripurasundari and Kali, two streams that have diverged and come together again throughout history. 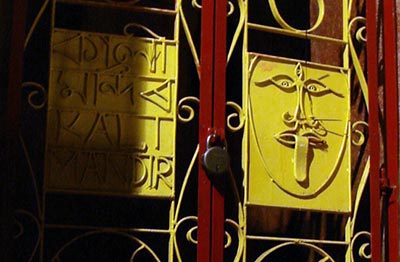 The gates of the Kali Temple at the Kamakhya temple complex. Photo credit: Kulasundari Devi.

Kali expresses herself in eight or nine discrete forms, depending on the tradition and the text giving reference, and though devotees only see one shakti pith for Kali at the Kamakhya temple complex, there are secret places known only to the priests of the temple, which are also revealed directly by her to her chosen ghoras, human vehicles who dance for days in the wild Debadhani festival each August.

Kali is plain truth, and thus can seem frightening, giving her the vicious appearance found in the Tantras and Puranas. Cold truth is often difficult to experience, and developing non-attachment as we walk the spiritual path can be painful and terrifying. As humans, one of our greatest instinctive fears is the fear of death, but Kali demands that we release our fear of death. She is the wisdom that realizes the fear of death is the fear of the annihilation of the illusory ego-self. The knowledge that grants liberation takes us beyond death and allows us to break free from the cycle of rebirth and make peace with the finality of non-existence. Freedom and contentment, appreciation of life and its wonders large and small, arise from releasing this fear, as we suddenly experience her in all creation, and in the terrible fleeting beauty of each moment.

To one who is afraid of facing or blind to their deepest, darkest fears and truths, she can be a terrible, fearsome monster, for she is the relentless urge in the dark places of our being pushing, pulling, beckoning us straight toward liberation, regardless of what we may have to drag ourselves through between here and there along the way. She teaches us that the only way to overcome our deepest fears is by facing them, and the only way to overcome desire is for desire to consume itself, until it is powerless. To one who knows her simply as truth, even in times of great suffering or upheaval she can be experienced as the great loving mother, holding us in her arms as she dances toward our dissolution into infinite being, which is herself.