Supreme reality is beyond dualisms of this/that, good/bad, existence/non-existence. We can experience Maa even in suffering and difficulty, and this is one of the messages of the Chandi as well as Tantra.

Most days, when I get up in the morning, I turn to the Chandi and flip it open to any random page. The Chandi is one of my favorite books, and by using it as a guide for meditation, I find it always has nuggets of wisdom that can shape my whole perception of things in a powerfully positive way. This becomes my meditation at least for the day, sometimes for the week.

12.36: Thus, O king, does the blessed Devi, though eternal, manifest again and again for the protection of the world.

12.38: O king, by her all this universe is pervaded, by Mahakali, who takes form as the great destroyer at the end of time.

12.39: At that time, she herself is the great destroyer. Existing from all eternity, she herself becomes the creation. She, the eternal one, sustains all beings.

12.40: In times of well-being, she is indeed good fortune, granting prosperity in the homes of humankind. In times of privation, she exists as misfortune, bringing about ruin.

12.41: And so, praised and worshipped with flowers, incense, perfume and the like, she grants wealth, progeny, and a pure mind established in righteousness. 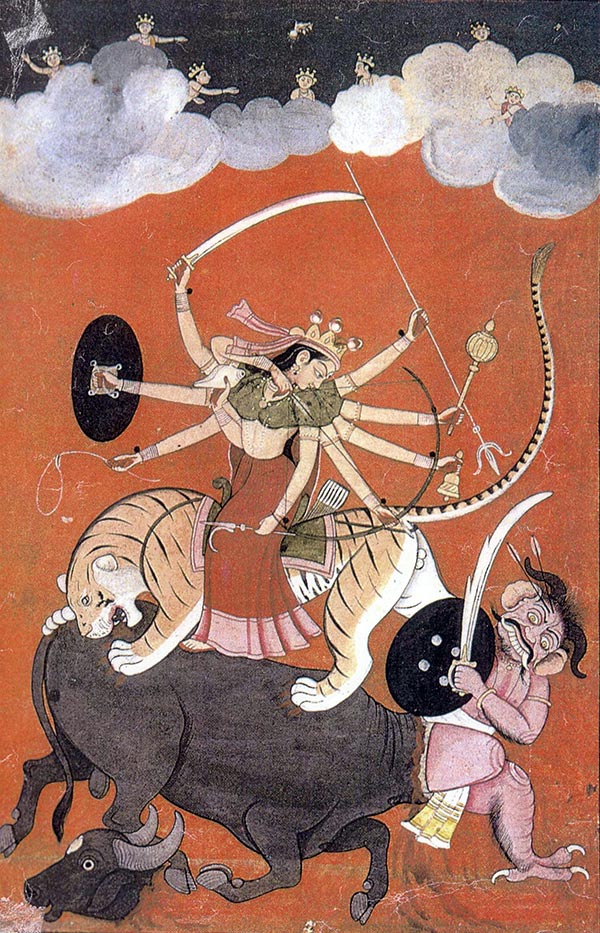 For some people, it’s easy to worship Devi when they are feeling good and things are going well, and then when things go badly they ask why MAA has abandoned them.

The Chandi tells us that all of this is the Divine Mother. On the Tantric path, we go through periods of great difficulty, testing our resolve and our character. Our true nature comes forward when we are stressed, and also when we are given great blessings. All of us have had moments we’re not proud of, moments that hopefully we have learned from. The process of purification of mind can be difficult indeed.

Yet in every moment, we have an opportunity to become more aware, to let go of judgment and fear. In 2010, I was struck with a life-threatening illness that tested all of my boundaries. Two days before I was to go on a six-month pilgrimage to India, I received an email from the friend I was going to meet there, urging me to visit the doctor. I’d been having some health problems, and my husband also urged me to go. I found out later my friend had a dream that I died on the plane – she didn’t want to tell me because she didn’t want to frighten me. It turned out that according to every doctor I met with, I would have certainly died if I’d gotten on that plane.

When I went to the hospital, there was a random shooting at the Emergency Department right next to where my husband and I were waiting, and two people were very badly injured. We had to take cover from the gunshots in the chaos and confusion, and I chanted to Devi to save the lives of the two boys who were shot and to bring the shooters to justice and help them turn their lives around (the boys were indeed saved, and the shooters were caught within hours, thank goodness – thanks to the expertise of the doctors on hand and the efforts of local police and neighbors).

After the shooting, the hospital went on lockdown. I was soon separated from my husband and not allowed to see anyone for many, many hours. Alone in a cold and empty room, uncomfortable, vulnerable, utterly helpless to do anything, overwhelmed, told that I had been saved by 24 hours from certain death, I began to cry. My tears were a moment of absolute release, letting go of any control I thought I might have, just saying to the Mother, I give up. I give everything to you. My life, my death, everything is yours. Take it, because all I want in this moment is YOU.

My tears carried me into a place of such peace, and then they stopped. For a long time, I floated in between time and space, completely calm, understanding the absolute insignificance of this body, just a shell. The pain, the uncertainty… it was meaningless! The vast expanse swallowed me up and I merged with it, my thoughts and consciousness gone. With Her grace, I was carried out of this hellish moment and into one of supreme bliss.

Later, when the doctors and nurses were poking and prodding me, when something would hurt very badly, I would cry, without feeling shame. I didn’t have to be strong or stoic. I could see that all of this was the shadow play of the Divine Mother, and She had, in fact, saved my life. Even the illness itself was a blessing, although it has been very difficult and painful to deal with from day to day.

In the days and weeks following, I was given a lot of blessings, even as other things seemed to go ‘wrong.’ I had to trust Her. And indeed, whatever seemed like a curse was almost immediately revealed to be a blessing. I had to trust that everything would be sorted out, whether it was large or small. And the more I let go and trusted, the greater the miracles seemed to be.

I learned through this, as I have learned through other difficult experiences, that it’s okay to feel discouraged, angry, depressed, sad, afraid, or otherwise unhappy when difficult things happen. But that doesn’t mean there isn’t also absolutely room for trust, love, and courage in the midst of those dark emotions. When my husband had to give me painful injections, I would say, “I trust that MAA has everything under control, and I am grateful that this is saving my life, but THIS REALLY SUCKS RIGHT NOW!”

Trusting in Mother doesn’t mean being in denial about how you’re feeling. Being in bliss doesn’t mean not experiencing pain or suffering. Those things are Her, too. When we look at the lives of almost all of the saints, we see they lived with pain, they experienced anger and frustration and all of these human emotions. She is the entire range of human experience.

Being in bliss doesn’t mean not experiencing pain or suffering. Those things are Her, too.

This means that instead of an either/or (dualistic) approach, we can take a both/and (non-dualistic) approach. We can feel discouraged AND hopeful. We can acknowledge our fear AND be courageous. Learning to hold these seemingly conflicted things in our minds together, and reconcile them, is a powerful exercise in cultivating detachment, or vairagya.

Vairagya is not really about going into the forest and leaving everything behind. After all, as Lord Krishna told us in the Bhagavad Gita, if you renounce the world and go into the forest, all of your emotions and thoughts and attachments follow you right into the forest! Although renunciation is a powerful path for some, one doesn’t really need to be a total renunciant to experience liberation. One needs only to completely surrender oneself to the Divine. All of our rituals, sadhanas, and so forth in all the various traditions are just means of achieving surrender, each path suited to a different temperament.

In Tantra, although there are certainly plenty of people on the renunciant path, we tend to live a householder’s life, seeing MAA as not separate from the world, therefore we also do not need to be separate from it. Rather, it’s being detached from the fruit of one’s actions, not being attached to any outcome. And one of the best ways to cultivate this is by cultivating trust in the Divine Mother.

I know a holy man who is in maunam (vow of silence) for months and years at a stretch. A divine soul, he manages to travel all over the world, helping everyone he can, and he doesn’t speak a word. He just trusts that the Mother will sort everything out, and his silence is a sign of trust in that. He has given up his own voice so that he can listen to hers more clearly.

My own illness was a wonderful lesson in getting out of MAA’s way and letting Her take care of everything. When I couldn’t give myself injections, my husband stepped forward to help me, despite his own discomfort. When I couldn’t pay my medical bill, many friends and even complete strangers stepped forward in incredible, selfless generosity to help me pay it. When my car then suddenly broke down unexpectedly, many friends stepped forward to take me to pujas and abhishekams in far-off places. When I nearly died, MAA herself came to take me into Her arms and show me how small things such as life and death don’t matter in comparison to the limitless, timeless ocean of Infinite Being.

In the end, we have a choice. We can choose our actions and reactions. It may seem difficult not only at first, but continuously. However, by cultivating a practice of awareness in each moment, we begin to see MAA in all things. Even in moments of extreme difficulty, if we choose to surrender to Her, we will find bliss. Bliss in this sense doesn’t mean freedom from suffering, as the saints have demonstrated throughout time. But it does mean a kind of beautiful freedom to love limitlessly even in the midst of suffering, and that pure love is none other than the Divine Mother Herself.

MAA is the creator, the preserver, the destroyer, and we are not separate from Her. Nothing is. And so with this in mind, I go into this day remembering to trust that everything is happening as it should. I remember that even in moments of suffering, She is there. That the more I surrender to Her and listen to my own Atman, and take distance from the fire of my emotions, seeing them as a gift but not the only reality, the more I will experience oneness, which even in the midst of pain and death grants supreme bliss.