Yesterday my husband was reading my latest post when he stumbled on this verse from the Chandi:

“Wait a minute,” he said. “By her the universe is deluded? That doesn’t sound good at all!”

My husband doesn’t have a background in Indian philosophy, and so to his very logical, practical mind, this just sounded like crazy talk. And I realized that there may be others out there who would benefit from learning about this whole concept of delusion and illusion, which takes very different forms in Advaita Vedanta – the root of modern Hinduism – and Shakta Tantra, the embodied, mystical path of the Mother Goddess.

The concept of maya, or illusion, is an important one in Hinduism. In Advaita Vedanta, the philosophical school championed by Adi Shankaracarya in the 9th century, which became the foundation for modern Hinduism, the manifest world is merely illusion. It’s not real. The only thing that’s real is Infinite Being, or Brahman, which is not separate (a-dvaita, non-duality) from our own true Self, which is separate itself from the illusory ego. Brahman pervades the entire universe, and is both saguna (with attributes) and nirguna (without attributes). Eternal and unchanging, Brahman is the only actual reality. For Shankara, Maya is the illusion of separateness an the illusory physical world, all generated by the Goddess (who is herself a manifestation of Brahman, though he speaks very little about the relationship between Maya and Brahman). It is purely physical and mental, and it is not real. Only Brahman is real. The goal of life is to disentangle ourselves from Maya and realize its illusory nature, and our non-separateness from the one true reality of Infinite Being.

Shankara developed this doctrine in response to what was happening philosophically at the time in India. Buddhism and Jainism had become very popular, and Hinduism was declining. It was Shankaracarya who reconciled the various spiritual truths in Buddhism and Jainism with Hinduism, and developed a system of thought and worship that is still held dear today. His revolutionary philosophies and charismatic leadership revived Hinduism, and even though he died very young, before reaching 30, he left an indelible mark on Hinduism.

The core of his philosophy was advaita, or non-dualism. This philosophy goes back to the Chandogya Upanishad, which declares “you are that!” (Tat tvam asi – Chandogya Upanishad 6.8.7) “That,” of course, being nothing less than Infinite Being. The goal of the Upanishads was to reveal the truth that we are not separate from God, that our birthright is our inherent divinity, and that our one goal in life is to strive toward realization of that truth. Realization means not just understanding intellectually, but having a profound and permanent shift in consciousness that takes one beyond ordinary understanding into a permanent state of divine grace. 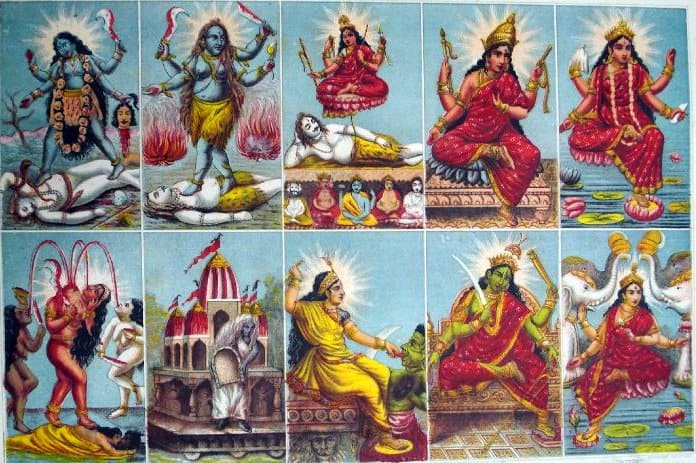 The Ten Mahavidyas. Popular print, Calcutta, circa 1895. Courtesy of the British Museum.

To be very, very general, the Buddhists believed that the only thing that was real (as in, really REAL) was emptiness. Shankaracarya countered and said that the only thing real was Brahman, but he agreed that this physical universe was an illusion. The explanation for this illusion was that shakti, the divine force personified as female, manifested this world as an illusion that we must strive beyond in order to understand our true nature. In this Advaita Vedantic philosophy, non-dualism means that the Atman, or individual soul, is not separate from Brahman, Infinite Being. However, none of what we see around us is real or divine.

As I like to put it, in Advaita Vedanta, all are one, but some things are more “one” than others!

By contrast, the Shakta Tantric view is quite different in regard to the material world. In this philosophy, we see the manifest world as being created by Shakti, but we see it as not separate from Her. Everything that exists is Her divine body, Her divine presence. It is a radical form of non-duality that embraces the totality of existence and experience as Her.

The goal of Tantric practice, whether it is tamasic (impure qualities, such as using meat, whiskey, and sexual intercourse) or sattvic (pure qualities, such as using vegetarian foods, sexual continence, and so forth), is to fully embrace one’s own body as the divine vehicle that Shakti has given us to recognize our oneness with Her. This body is a manifestation of Her, it is one with Her, and yet we cannot identify too much with it because this body is not who we really are. We are Her, absolutely and utterly, and not merely the ego that is bound to this body and this identity in the world, that has a name and a job and favorite foods and likes to listen to pop music and so forth. That sense of relative smallness is what has to be annihilated totally and utterly through intense, disciplined spiritual practice, or sadhana, under the close guidance of a qualified guru.

Everything that exists is Her divine body, Her divine presence. It is a radical form of non-duality that embraces the totality of existence and experience as Her.

Now, most of us don’t need to eat things that disgust us in order to begin to open to the supreme knowledge of oneness with our Divine Mother. However, it is worth exploring the notion that even those things we don’t understand, that we hate, that we revile – whether they be other people, other religions, or anything at all – are all manifestations of the Divine Mother, as well. We are not separate from them, and often their shadows mirror our own.

Can we radiate love to politicians we dislike, even as we vote against them and disagree with their stance on the issues? Can we send love to terrorists and try to understand them compassionately, even as we denounce their violent actions and work toward peace? Can we send love to the person who cuts us off in traffic, even as we shake our heads at their recklessness? Can we, as they say, agree to disagree, and truly be okay with that?

All of these practical applications are reminiscent of Tantric philosophy, embracing a fuller reality that resolves seeming conflict by embracing difference both internal and external, and not just black/white, right/wrong, yes/no, because in the final analysis, ALL of these things are MAA. Engaging in drama, criticism, and so forth just creates more karmas for ourselves, which keeps us bound to limited consciousness. To be free, we must free ourselves.

Wrapping your head fully around all of that is a deeply difficult and transformative process. It is a matter of shifting consciousness on a deep level, and even if you have not yet found a guru, you can begin to bring this consciousness into focus, and free your mind from the shackles of dualism with the help of MAA’s grace.

So in this verse, we find the entire philosophy of maya laid out for us. She is the one who brings forth everything in this universe. She is both our ignorance and our knowledge, because ultimately, there is nothing that is not Her. And when we realize Her, we attain true wealth, which is the nectar of immortality – liberation of the soul into oneness with Infinite Being. Maa Kamakhya is praised in the Tantras as Mahamaya – the Great Illusion – because She takes on all forms, and is also formless. She is Infinite. And through Her, who grants all desires, we are granted the supreme knowledge.

I hope this has been helpful. Certainly there are many views on Maya, and this is merely my own humble and limited experience as a sadhika, and the small amount of wisdom I have been able to glean from my studies and practice. If reality is infinite, then so are the experiences of that reality. I encourage you to explore and expand. Jai Maa!