Worship of the Mother Goddess and related Tantra-based rituals have their endless fount atop the Nilachal Hills: the sacred shrine of Sri Sri Kamakhya. Situated on the southern banks of the Louhitya, known as the mighty river Brahmaputra, these hills are part of the metropolis of Guwahati, the capital city of Assam. Situated within these hills are the temples of the Dasamahavidya, Anga Devata, and other temples dedicated to various deities. Mention of this Shakti temple of Kamakhya is found in Bhagavatas, Puranas, several of the Tantras, and many other ancient Scriptures.

According to mythology, Lord Siva in His frenzied grief carried the lifeless body of his consort Sati on his shoulders,  and Vishnu dismembered the body with his Sudarshan Chakra. The Yoni (genitalia) of Sati fell on the hill, representing the body of Siva, which turned blue (nila). Thus the hills became the Nilasailya or Nilachal Hills. The temple is said to have been originally built surrounding the Yonimandala by Kamdeva with the help of Biswakarma, and is a symbol of great veneration and is regarded as a source of divine power and influence. Different modes of Shakti puja of the Tantric path are centered around this symbol, which projects the very essence of the creative process of the universe.

The mysticism surrounding the worship of the goddess Kamakhya has also lent a mysterious aura to the whole region, and various social norms have sprung up which are quite distinct in comparison to other places in the world.

The countless pieces of sculpted stone scattered all over the Nilachal Hills bear mute testimony to the beauty of the original stone temple of Kamakhya. The main temple was covered in sculpted images of the sixty four Yoginis and eighteen Bhairavas. Owing to disputes, the ravages of time and natural calamities, only the base of the original temple survives. However, various rulers and kings in later periods have added to the remnants of the original temple, and the present structure is a medley of architectural styles hailing from different periods and dynasties. Through the ages, various rulers took up the worship of Kamakhya and these rulers either invited or brought various families of scholars and priests from various parts of the country to perform the rites and rituals associated with the deities. The royal patronage of Shakti worship became dominant over the other forms of worship in Kamarupa and surrounding areas.

Different families of priests, according to the hierarchy laid down in the scriptures, were brought at different times for the performance of the various rites, rituals and duties associated with the worship of the Mother Goddess Kamakhya. As per scriptural tenets, the system of worship is an elaborate affair requiring the participation of several different classes of priests designated as:

The mysticism surrounding the worship of the goddess Kamakhya has also lent a mysterious aura to the whole region, and various social norms have sprung up which are quite distinct in comparison to other places in the world.

The duties related to the preparation of the daily offering of bhog (food) items are entrusted to Brahmin families called the Supakars. Apart from the Brahmins a host of non-Brahmin families formed the majority of the workers and servants of the deity. These families were directly responsible for the smooth functioning of the entire process of worship and were part and parcel to the ritualistic practices. Here also the different categories of duties led to the creation of distinct groups and were named as: 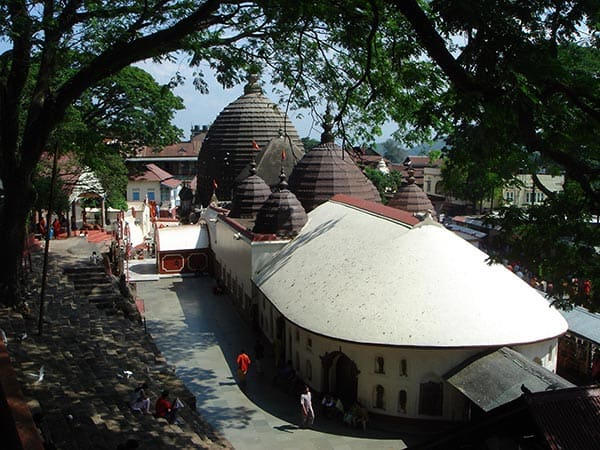 All these categories of priests and workers formed the entire community of Shebaits of the Deity, and they were all required to perform their designated duties on a daily basis, as well as during various annual ceremonies and festivals.

Worship is based on the sankalpa (dedication) of the Nitya Puja (daily worship) which invokes the blessings of the Goddess for the entire population of the state. Daily worship is a continuous process without any break throughout the year, except during the three nights of Ambubachi.

The worship of the Goddess Kamakhya in Her various forms encompass a host of festivals and ceremonies which has contributed to the rich cultural fabric of the region and the main ones are enumerated here:

Apart from the Kamakhya Temple, there are innumerable temples and kundas (ponds) scattered all over the Nilachal Hills. According to an estimate by the Archaeological Survey of India, there probably existed more than a hundred sometime in the past. The temples that still remain today are: