Kamakhya is one of the most important goddesses in the history and development of Tantra and Shaktism, but she remains obscure today, somewhat fitting for a goddess presiding over esoteric rites and rituals. Many people have never heard her name, nor do they understand what her name means. But even those who do understand the Sanskrit meaning of her name, and its explanations in various Tantras and Puranas, often do not know the pre-Vedic, hidden history of this truly ancient Mother Goddess.

“As the Goddess has come to the great mountain Nilakuta (Nilachala) to enjoy making love with me (Shiva), she is called the goddess Kamakhya (renowned Goddess of desire), who resides there in secret. 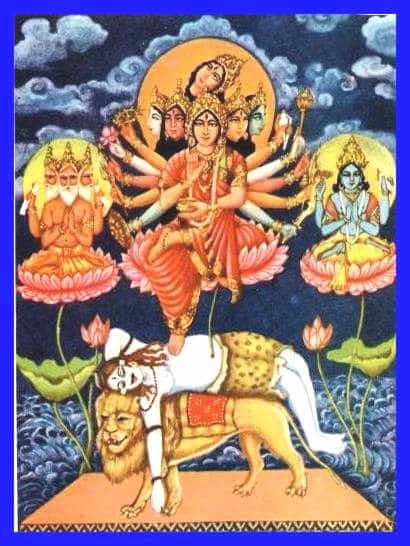 Kama is often translated as lust or desire, but it is also love. Kama is the name of the God of love, and the urge of love and desire within. She is the eternal, cosmic yoni (vulva, womb, source), from which all things emerged, and to which everything will return. She is worshipped by her devotees as the Adi Shakti, the original, primordial power from which consciousness and being arose. In Hindu terms, she is nothing less than the Brahman, or Infinite Being, from whom Shiva and Shakti emerged and began creating the universe through their vibratory unity.

However, although we can see her cosmic supremacy in her Hindu and Tantric mythology and thealogical development, this is not the whole story. The goddess we know as Kamakhya has a history that goes back far beyond the arrival of Brahminical Hinduism and the Sanskrit language in Assam, and it is likely that “Kamakhya” is the closest Sanskrit word to her original name.

There are very few historical records to trace this history, but it can be pieced together with oral histories and stories passed down through generations. These stories are not academic and do not demand archaeological evidence, but live in the hearts of the people. Such stories often reflect the inner truth of a tradition, even when the facts of history may remain inconclusive. Since we are after inner truth, we will explore the Goddess Kamakhya’s rich legendary lineage here.

There is a tribe known as the Khasis, a (formerly) matriarchal, matrifocal, and matrilineal tribe whose history goes back into antiquity. Their woman-focused society placed women in positions of power as community leaders, heads of their households, and religious officiants. Women enjoyed a position of power, while men were also honored as full partners and leaders in society. Women and men shared household duties and responsibilities, including child care. Beginning in the 18th century, with the arrival of the East India Company and an influx of patriarchal cultural values from all sides, the Khasis were pushed to change their means of rulership, inheritance, and other traditions to be more male-focused. This coincided with a campaign to convert Khasis to Christianity. Some adopted Hinduism. However, women remained at the center of society, with a significant amount of rights and privileges, as well as freedom of movement and expectations of leadership in the home and community. The Khasi people today remain strong, independent, and their culture remains matrifocal. Their traditional spiritual philosophies are happily regaining popularity and prominence, as they are reclaimed by the people and brought into a modern context. We strongly support the women and men who are working to revitalize Khasi language and culture.

The full-fledged Khasi religion and all its intricacies of ritual is now largely lost to history, but we know that it was a venerable and complex philosophical and mythological system on par with any major religious tradition. One of the primary deities of the Khasis was Ka-mei-kha, meaning “She who created you.” She was a powerful mother goddess who created the universe, herself the cosmic womb, as we now know Kamakhya to be.

When the Brahmins arrived two millenia ago in what is now known as Assam, they brought Shaivism with them, and established numerous Shiva temples in the area. But this goddess was so powerful and popular amongst the people who lived in the area that she was eventually incorporated into the Hindu pantheon and worshipped as Kamakhya. Legend says that the great siddha Matsyendranath (Macchendranath) was born in Assam, and that he studied esoteric worship of the goddess Kamakhya at Kamarupa (the abode of Kamakhya) in the company of yoginis, female adepts, who initiated him. He then went on to Sanskritize and codify their rituals, incorporating Brahminical philosophy and subverting it at the same time in order to create a rapid method of reaching a liberated state. And thus Shaktism was born. He went on to initiate many famous progenitors of various Tantric lineages that still exist in some form or another throughout India and Nepal, such as Gorakhnath and Abhinavagupta. Matsyendra’s teachings are now largely lost, but are said to be recorded in the Kaulajnananirnaya and the Matsyasukta.

This goddess was so powerful and popular amongst the people that she was eventually incorporated into the Hindu pantheon and worshipped as Kamakhya.

In the medieval period worship of this goddess became so popular that she was made the official goddess of the kings and their empire. Kamarupa was renowned to both Buddhists and Hindus as a powerful pilgrimage center, and in fact one of the earliest surviving references to Kamarupa as a shakti pith is in the Hevajra Tantra, a fourth century Buddhist text.

Bengalis pronounce Kamakhya as “Kamaksha,” and Hindus from throughout India tend to favor the Sanskrit pronunciation of “Kamakhya” or else “Kamaksha.” But the local pronunciation amongst the Assamese community that actually lives in and around Kamakhya is typically Ka-mei-kha. This may simply reflect the survival of an ancient and powerful tribal goddess who has survived through millennia, worshipped in different ways by many different communities, but touching each devotee with her power and grace as the primordial, original mother.